Don’t “Do-It-Yourself”: Why You Need to Hire a Professional for Custom Kitchens

There’s one issue above all others that gives people pause when considering a home improvement project: cost. When they consider bringing in a professional contractor to do the work many hesitate, fearful that they’ll essentially be held hostage by the process and forced to pay outrageous amounts for a job they might be able to do just as well themselves. However, while one should always proceed carefully when choosing a contractor for a major project and the DIY impulse is certainly understandable two things commonly get lost in the debate:

However, while one should always proceed carefully when choosing a contractor for a major project and the DIY impulse is certainly understandable two things commonly get lost in the debate:

Something else should be kept right up front as well: Your home is your largest single investment and any changes you make to it, good or bad, are going to affect its overall value.

Regardless of how much time, effort, and money are poured into a DIY home improvement project, it can actually result in reduced home value when it’s finished because of questionable design choices, poor material choices, and workmanship that is not up to professional standards.

Kitchen remodels are the most popular type of major home improvement project. As such they make for a good example when considering the subject of a professional contractor vs DIY.

The kitchen is the most important room in the house. 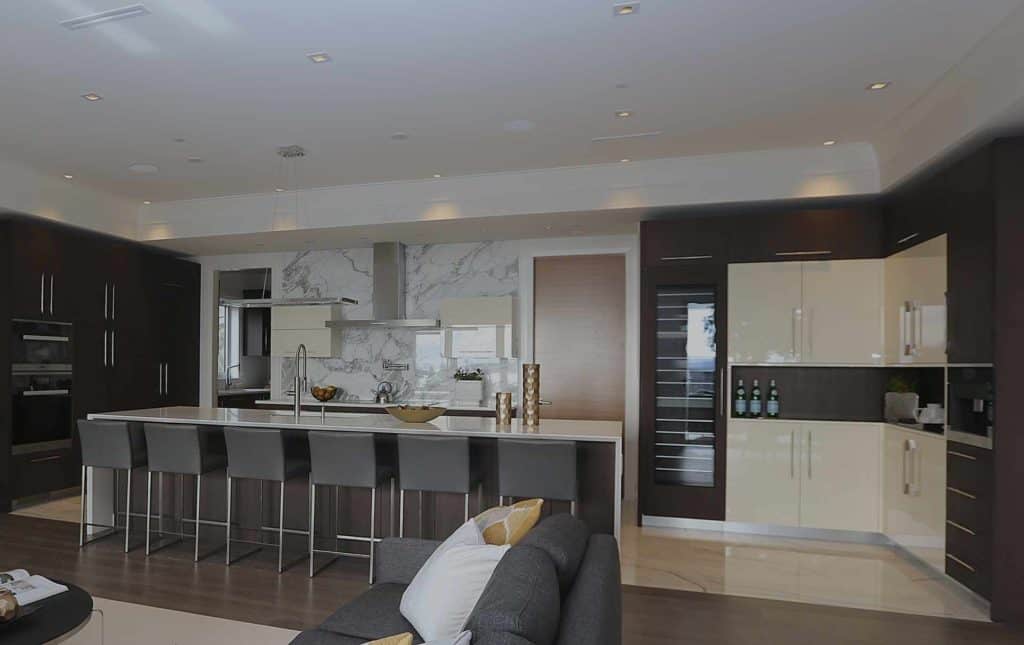 Nothing else (with the possible exception of the bathroom) really comes close. The human attachment to the kitchen dates back hundreds of thousands of years to the time when early humans would congregate around the fire to share the spoils of the hunt and reaffirm the bonds that held them together.

The attachment of modern humans to the kitchen is no less real or profound which is why – as any real estate agent will tell you – most prospective home buyers won’t consider a house if the kitchen doesn’t sit well with them.

And because the kitchen is the most celebrated and revered part of the house it’s also the one that attracts the most remodeling attention. Homeowners the world over are only too happy to invest in creating a custom kitchen that speaks to their tastes and reflects their attitude toward family and life.  Most hire professionals to come up with the design (using input from the homeowner of course) and perform the work and in the vast majority of

Most hire professionals to come up with the design (using input from the homeowner of course) and perform the work and in the vast majority of cases, the results are worth the money and effort. Over the past 30 years, however, as the DIY movement has snowballed an ever-growing number of homeowners have decided that kitchen remodeling is something they can easily do themselves. In the process, most discover a few simple truths:

When you hire a professional to undertake your kitchen renovation you’re bypassing all of these potential roadblocks to success and at the same time, you’re getting a first-class design and workmanship that will stand the test of time.

But if you’re still not convinced let’s turn the spotlight inward and examine whether you indeed have what it takes to renovate the kitchen yourself and, more importantly, to do it right.

When it comes to carrying out a kitchen renovation there’s no shame in admitting this sort of thing might not be your cup of tea. The only shame is in trying to kid yourself into thinking you’re something you’re not.

A Careful Look at the Financial Considerations

Since most DIY efforts are driven by a desire to save money it’s important to have some notion of how much you expect to save by doing it yourself. Some folks will ask for bids from professionals and then pick those bids apart in an effort to determine where they could save money by doing it themselves.

Labour is where they typically expect to save the most. And while labour is a big part of the cost of having a professional perform your kitchen renovation the assumption that you’ll save 100% on labour doesn’t really take the hidden costs into consideration.

So what are the hidden costs? Well, if you’re working 20 hours a week or more on your kitchen renovation that’s time you can’t be working on something else, something that might generate income.

Also, it’s safe to assume you’re going to spend more on materials than a pro would and so that extra cost must be added into the mix. Also, as mentioned above, you’ll likely have to buy most of the tools you’re going to need so that cost has to be factored in too.

And keep one more thing squarely upfront: If you get hurt while renovating the kitchen yourself you may wind up incurring significant medical costs and lost wages. Also, if you damage an unrelated item or part of your home during construction you’ll have to pony up to fix or replace that as well. Whereas a contractor is covered in the event of injury or damage to your property.

The bottom line is that there’s a very real possibility that handling a kitchen renovation yourself could actually wind up costing you more than if you hired a professional to do it for you.

Okay. How Do I Find the Right Professional?

If you’ve read the above and answered all the questions and determined that performing your own custom kitchen remodel is right up your alley, good for you! You also might want to consider opening your own remodeling company.

If on the other hand, you concluded that the many risks of doing it yourself outweigh any potential rewards then you’ll want to find a reliable company with a proven track record to handle the remodeling work for you. It may seem like a daunting prospect but it doesn’t have to be if you just follow these common-sense tips:

The impulse to do-it-yourself is understandable and there are instances when it might be both the right and fun choice (say for instance if you’re installing a new ceiling fan). On the other hand, there are times when the DIY impulse can lead to far more harm than good, and the larger the project the truer this is. In general, if the project you are contemplating would normally involve more than one building trade you should find a contractor to handle it.

Remember, your home is not just your castle, it’s also the largest single investment you’ll likely ever make. Approaching the house as though it were just a playground for trying out DIY skills will run the very real risk of actually harming not just its structural and functional integrity but its market value as well. Home improvements are supposed to be just that: improvements to look of the home, to its functionality, to your quality of life, and to the home’s market value. Don’t gamble with your largest investment. When it comes to large-scale projects like custom kitchens call the pros at Vancouver Home Builders.

Build Your Own House: You Dream Home From The Ground Up
Next Article

Building your own home is about desire, fantasy, and inspiration. It’s achievable and Antares Properties will help bring your dream to reality.